In the public relations field, we talk a lot about never burning bridges because you’ll never know when you might need a favor or support. The same holds true for friends made during college. This is why we’re writing this blog post—to share with you the story of Cara Mahon and Dani Myers and how the UCM PR Program spurred a lifelong friendship.

We met during sorority recruitment when we first learned we were both PR majors. Although we joined different sororities, little did we know this was just the beginning of our friendship. Together we endured mock press conferences, supported each other as PRSSA VP and president, survived the PR campaigns capstone course, and navigated the “real world” of PR. We’ve even joked that we’ll open our own PR agency one day (it’s still a possibility!).

Our advice to current PR students is this:

Stick together. You never know when a member of your group project for strategic planning could give you a job lead five years later. Or, your manager for Innovative PR might be the one to hire you one day. Or, as in our case, you might just need someone who “gets it” (i.e., understands PR) so you can be each others’ rock during times of transition in the great, big world out there.

With that being said, here’s how we’ve supported each other beyond college graduation. And, we both agree that our professional and personal lives would not be the same without each other!

Navigating the world of academia is a little scary, especially after taking a four-year hiatus. That’s how long I focused on my career before I was accepted to the University of Missouri where I am currently pursuing my online master’s degree in interactive media.

Mizzou’s master program is rooted in theory. Shortly after starting the program, I learned that I would be on a thesis track and needed to pick a quantitative or qualitative methods route. “What?” This was all foreign to a student who graduated with an applied bachelor’s degree. Intimidated was an understatement. 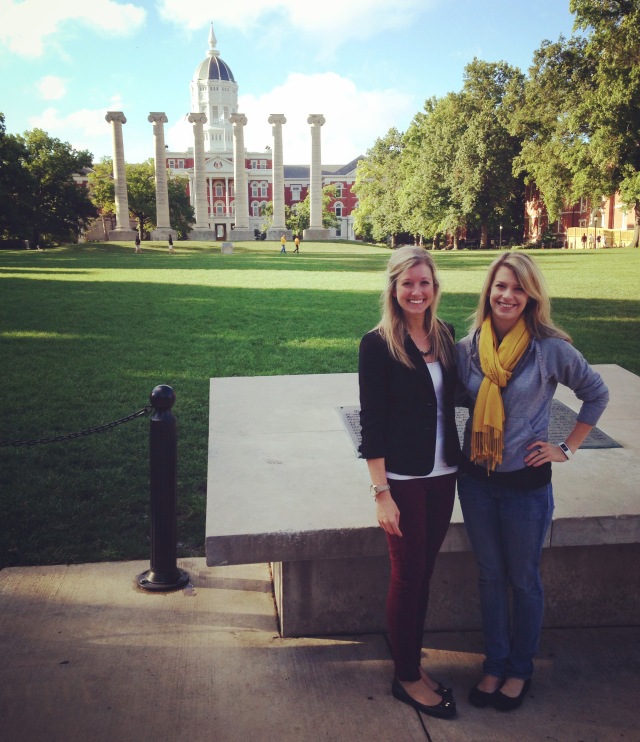 Luckily at the beginning of the fall 2015 semester, I had a weekend class on campus. Dani (a current doctorate student of the same program), without missing a beat, graciously offered me a place to stay with her. Not only that, she gave me a tour of campus, showed me where my classes would be and drove me to class so I wouldn’t have to worry about parking. These little gestures meant more than you could imagine to someone who never took classes on a campus as large as Mizzou. However, it was Dani’s advice she shared with me throughout that weekend that was invaluable and put my anxieties at ease.

Dani shared her initial struggle with her program also. She explained the different method routes to help me choose. She gave me insight on my professors. She shared study tips for trying to digest a giant list of journal articles for my first lit review. She gave me advice on how to manage a full schedule of homework, while also balancing a life outside of the classroom.

Best of all, Dani and I reconnected as friends. It had been several months since we had seen each other, so we took time to enjoy the culture of Columbia indulging in local coffee, donuts and watering-holes. We caught up on life and made plans to see each other again soon. Even though our paths have led us to different cities for now, I know Dani is someone I will always connect with professionally and personally.

After finishing my master’s at UCM, this small town girl was headed to the “big city” – Kansas City, that is. What put me at ease during this transition was Cara’s enthusiasm for getting me acquainted to the KC PR scene a year beforehand. Cara served on the Greater KC PRSA board and encouraged me to get involved as well. She connected me with other board members and soon enough, I volunteered to help with the annual PRISMS awards night. Nervous about what to wear, who to mingle with, among other things, Cara graciously offered me a place to stay, a ride to and from the event… let’s just say she basically served as my escort for the evening! She introduced me to PR professionals I still reach out to and connect with today. The next morning we were up and at ‘em at 6 a.m. to run in the KC marathon relay race together. After all, our friendship is the definition of teamwork.

The following year, Cara took on the daunting role of KC PRSA PRISMS co-chair and was responsible for planning and executing the entire event. When she asked if I’d be interested in serving on the PRISMS committee and helping her out, of course I said, “yes!”

Because, in our minds, that’s what PR Mules and Jennies do—we’re there for each other even after our college days have passed.

When the event was over, we enjoyed a cocktail at the after party and reminisced about how much has changed. From finding out our freshman year we were both majoring in PR (whatever the heck that was) to staying in the night of Cara’s 21 birthday to practice our PR campaigns presentation to celebrating our #MulesToTigers transition as we made the decision to further our education at Mizzou… we’ve supported each other along the journey and look forward to whatever comes next.