What’s In It For Me? Class Client Edition

During your time in the PR program, you will undoubtedly work with a “real-world” client. The benefits of having students do “real-world” work are obvious for the client – an accessible test audience, extra sets of hands to work on projects, a fresh set of eyes, etc.

If you’re a student going through the program, you might have a bit of trouble seeing the benefits. Here’s one for you – a job! I wouldn’t be in the position I am today if it wasn’t for the work I did for my class client.

The first semester of my senior year, I was enrolled in Magazine Design and was assigned Fight Colorectal Cancer (Fight CRC) as my client. Little did I know that my client would offer me an internship, then an interview and ultimately a job post-graduation.

Our team put together a 16-page publication 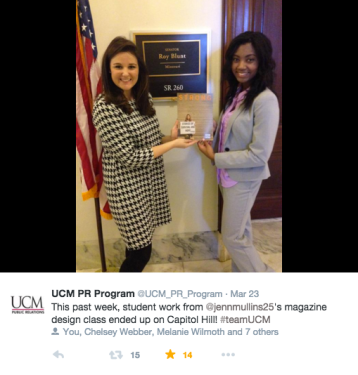 for Fight Colorectal Cancer full of survivor stories and awareness messages that was used as a leave behind on Capitol Hill during Fight CRC’s annual Call-On Congress event.
We named the magazine STRONG, after the One Million Strong campaign that recognizes the more than one million colorectal cancer survivors living in the United States. The work done on this project earned the program a Silver Anvil PRISM award from the Greater Kansas City Public Relations Society of America.

Throughout the project, I worked closely with my team and our contact at Fight CRC, Danielle Burgess. Danielle is the Director of Communications at Fight CRC and is also a UCM PR Program alumna. Once the project was finished, I talked with Danielle about internship opportunities with Fight CRC.

In January 2015, Evan Whittaker and I joined the Fight CRC communications team as interns. 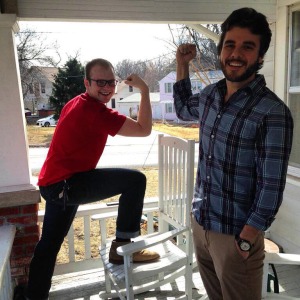 That spring, the whole communications team was made up of UCM PR Program alums – Danielle, Shawna Snyder, Evan and me. You never know who you’re going to end up working with, so be sure you don’t burn any bridges! Evan and I joined right at the beginning of busy season for Fight CRC, leading up to March – Colorectal Cancer Awareness Month.

Once my internship ended and I was getting ready to graduate, I was lucky enough to be hired for a full-time position at Fight CRC. It all started because of a class project I did earlier that year.

So, what’s in it for students? More than you think.

Tips for Working with Class Clients

Who knows, you just might end up with a job.